Here's a cutting board I made for some friends, out of a giant maple that they had to cut down. 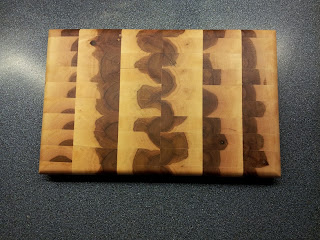 The tree started dropping huge branches around their car, so they figured it was time. 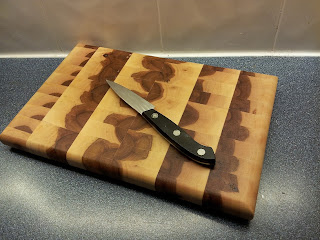 It took nearly 2 years to make this.  I cut the branches up on my bandsaw, let them dry in my garage for a year, then cut them into sticks to make the cutting board.
There are owls hiding in it.
Posted by James Jamison at 7:33 AM 21 comments:

I'm making a set of shelves for our dining room.  It's a race between me and 9+ month old Oscar.  Will I finish them, or will he crawl first.  The fate of all our breakable stuff lies in the balance.  As of today, he's winning. 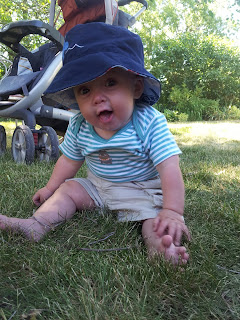 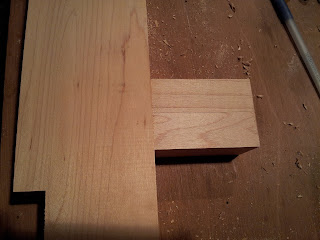 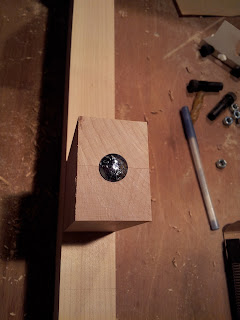 I'm securing them with carriage bolts, countersunk at the back with nuts. 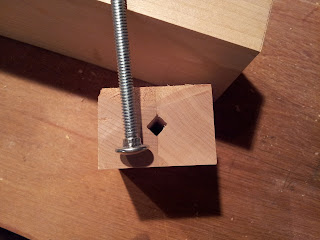 The bottom ones are quite long, so I didn't want to just use a drill as I don't have a long enough one, and even if I did, getting it to run straight would be problematic.
So I made them out of 2 pieces glued together after cutting a slot in the middle with a 90deg grooving router bit. This makes a lovely square hole which fits the head of the carriage bolt perfectly. 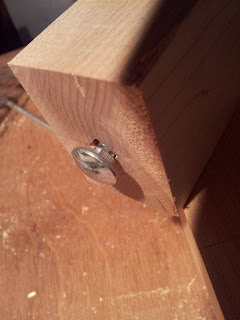 Posted by James Jamison at 6:35 AM No comments: 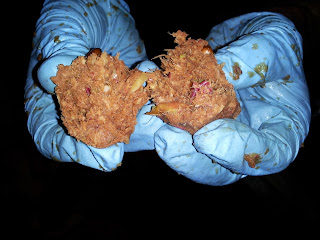 Last year was our second annual apple day where we gather up a bunch of friends and grind apples, press cider.  It was a good year for apples, we bought and gleaned many large containers from around the countryside.
On the big day, everyone assembled and we set to work.  We hadn't found a grinder, so our plan was to just cut them up small and use a grape press like this one to press the juice out.  Apples are much tougher than grapes.  We got no juice.
We had enough people there that someone knew someone else with an apple grinder, however it was a completely manual one of terrible design.  It took a crew of strong people to operate.  One to crank, the other to smash with a hunk of plywood and 2 to hold the whole thing down.
Things were not looking good, so we set up a second team to use a food processor to sliver the apples.

In the end, we did manage to make 78L of cider, but promised to have a better system next year.  I did some research, and came across this page on the importance of the grinding process.

To press apples, you have to break all of the cell walls first.  After that the pressing is easy.

With that in mind, we set out to design a grinder.  We had many ideas, most scary and dangerous, some involving stacked saw blades, like a dado, but as wide as an apple.

We settled on making something like the grater attachment on a food processor, except made out of slots for more grinding and less slicing. 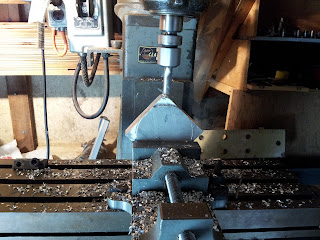 First we had to turn our square piece of salvaged aluminum into something round. 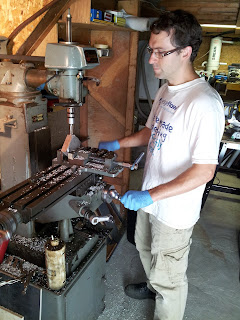 We got the initial shape using a circle cuter, but eventually had to switch to the milling machine to remove the bulk of the material. 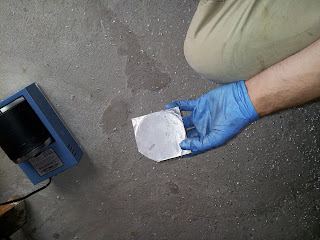 We then carved 6 slots in the face, drilled and taped the back side to fit into Nigel's large grinder. 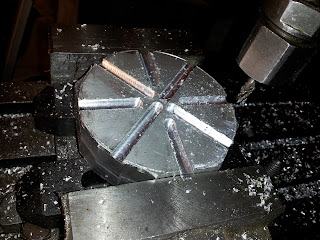 We then tried it out, with less than successful results.  The apple seemed to be just floating on the flat parts, with almost no grinding.  The little bit of juice it did produce however was encouraging, as it covered the ground, fence and my shirt in a fine apple mist. 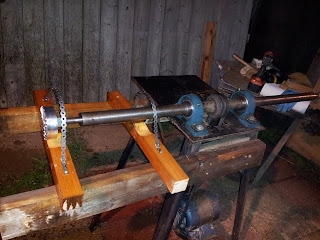 Back to the milling machine, we carved out much more, making many more ridges and also machining down the back sides, like a drill bit. 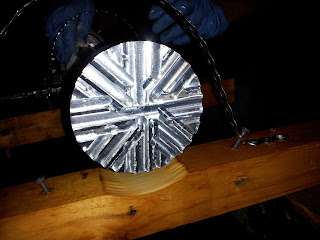 Now we had something.  We then wiped together an enclosure of pipe.  The apples are fed through the upper port on the left of the photo and a stick is used to push them into the impeller through the lower port.  We screwed a bunch of wood screws into the end of the stick to stop the apples from spinning. 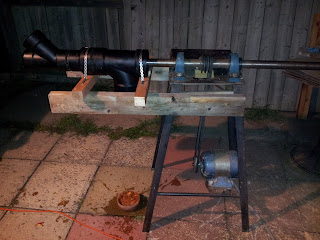 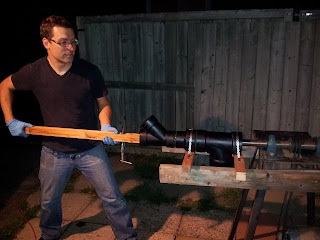 This seems to work really well.  We'll put a longer pipe on the apple chute for more capacity in the bin.  The plunger keeps them all from falling in at once, when one apple is done, simply pull it out to load the next apple. 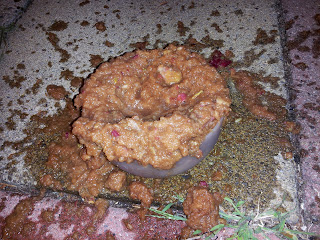 So far we are really happy with how it's turned out.  We can process 1 apple every 3.5 seconds and the pulp is nearly perfect.  The seeds stem and skin are left mostly intact while 95% of the meat is rendered into a pulp of juice and fiber, perfect for pressing.

Posted by James Jamison at 12:43 PM No comments:

Magic windows at the cottage

Here's a video of the magical windows that were at a cottage we rented.

They work really well, except it won't work so well for insulated walls, or double pane windows as the weight is already almost as much as I could comfortably lift.  I guess if you used pulleys with counterweights, it could work fine.

Other than that they are great, gives the place a nice clean look when they are open.
Posted by James Jamison at 11:43 AM No comments:

Last year my pole bean structure fell down, 3 times.  Once really wasn't my fault, as the tree behind it was throwing branches at it in a mega windstorm.  The other times were, as I had used standard tomato stakes to hold up the ends, but the bean load was just too much.

This year is different. 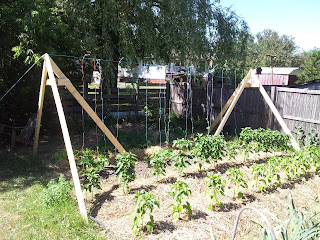 I used 3 full 8' 2x4s for each side, angling them to get a final height of just over 6', the height I can comfortably pick beans without having to haul a ladder into the garden.  The horizontal stringer is an old  clothesline with clothesline tensioner, abandoned by a previous owner. 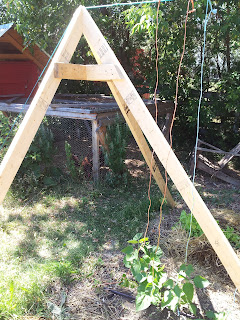 The vertical stringers are bits of binder twine from the straw I use as mulch.   At the end of the growing season, it's easy to pull the twine out and compost the beans.

I've seen some people use page wire fence to grow beans on, but unless you have goats, it's really a pain to strip off the old beanstalks in the fall.  Leaving them there for multiple seasons promotes rot.

Posted by James Jamison at 12:56 PM No comments:

Here's some hooks Nigel and I made last year.

They are fun, but I won't presume I know enough about forging to instruct anyone.

However, I needed some matching fasteners.  Rather than make some screws from scratch, I bought some standard machine screws from the hardware store and put the heads in the forge.  Heating them up red hot and then bashing them around with a hammer gets just the right look, while the other end remains unchanged.  The hooks and screws are then warmed with a torch and painted with beeswax.
They have been hanging in my kitchen for almost a year now, no noticeable change in finish.
I'm interested in making more, contact me if you'd like some. 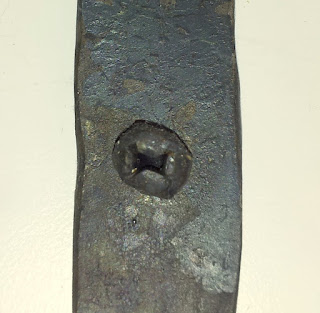 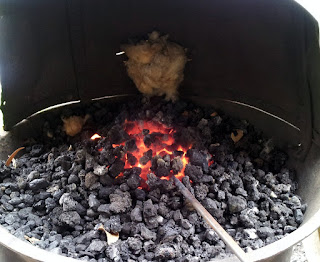 Posted by James Jamison at 6:21 AM No comments:

Trip to the glassblowing studio

Nigel and Dan recently invited me to Flow Glassblowing, where they have been taking lessons, which they quite enjoyed. 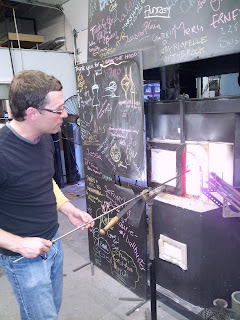 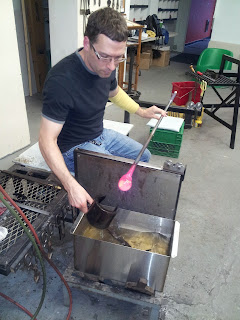 Read more »
Posted by James Jamison at 6:41 PM No comments: